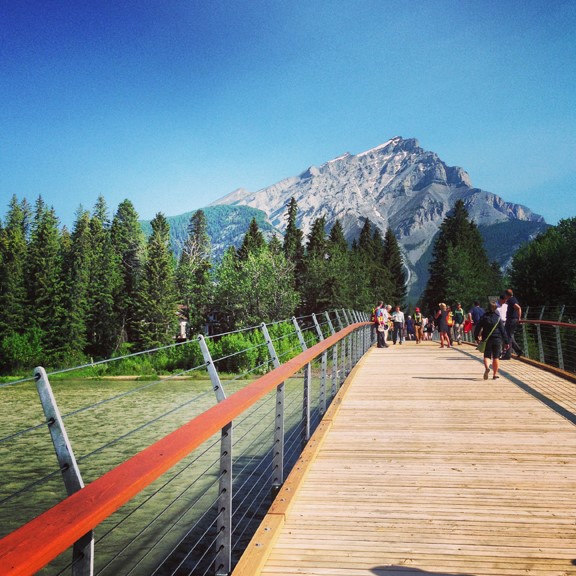 Why are you building a pedestrian bridge?
We must replace the old sewer utility pipes that currently run under the Bow River, crossing from the foot of Muskrat Street to Glen Avenue. The sewer pipes carry all the sanitary waste from the north side of Banff to our wastewater treatment plant on the south side. The age of the pipes is unknown. Since we are installing new pipes raised over the river, it's a unique opportunity to add a pedestrian bridge to the structure at no additional cost to the property taxpayer.

Why can’t you embed new pipes in the river bed as the old ones were done?
Three other methods (trench-less techniques or driving new pipes under the river bed, trenching the pipes to the vehicle bridge and securing them, excavating across the river) were examined in addition to a raised crossing. A raised crossing in the pipes current location has the least environmental impact. We also looked at lining the current pipes, but tight bends and the shallow burial depth make this method unfeasible.

What is the cost?
The project budget is $6.8 million. This includes the sanitary utility pipe crossing, the pump station, the pedestrian bridge construction and the water main crossing.

What about a bridge crossing from a Central Park location?
The layout of the gravity sewer system (with the trunk main in line with Muskrat street) makes using the Central park bridge to carry the pipes cost prohibitive.

The Town undertook a significant public consultation on the concept of a pedestrian bridge in 2007, and Council approved a bridge to be built from Central Park to the Recreation Grounds contingent on finding the $2.5 million in funding. The funding was not obtained and the project was shelved. If the funding for a second bridge were available, the Town would certainly consider building a second pedestrian bridge in the Central Park location. In the meantime, the replacement of the sanitary utility crossing from Muskrat Street to Glen Avenue is a priority.

Is this a new project?
The pedestrian bridge concept has been proposed since 1914. It has been identified in the Trail and Open Space plan and the recreation masterplan. Many public consultations have been undertaken, most recently in 2001 and in 2007.

In the 2007 customer satisfaction survey of residents, 60 percent were in favour of a pedestrian bridge.

What is the Environmental Assessment?
The Town must complete an environmental assessment for all projects, as stipulated by the Canadian Environment Assessment Agency (CEAA). This review primarily looks at the bio-physical aspects of a project. Socio-economic benefits are looked at in context of the physical environment. With all assessments, there is two-week public feedback opportunity on the bio-physical aspects. The Town received approval from Parks Canada to proceed in fall 2012.

What will the crossing look like?
The bridge will be a continuous low-profile span preserving existing sightlines and views from all vantage points.The use of wood and stone for the abutments is consistent with the Banff Design Guidelines and Banff’s heritage character. A wood walking deck makes for a pleasant crossing.

What are the environmental mitigations of the project?
An 80 metre central jump span enables the supporting piers to be located close to the banks, where they will only be in the natural course of the river for a few months of the year.

The mechanical systems required to run the lift station will be housed within the north abutment, eliminating the need for any additional above-grade structures.

The existing trails on both sides of the river can be maintained without the requirement for substantial grade or alignment changes.

How will you mitigate noise and improve public safety?
The bridge will connect two well-used public pathways, and offer a safe crossing for families and visitors. The bridge will accommodate an ambulance or a rescue vehicle, though not a fully loaded fire truck. Lighting, bridge access, landscaping, pathway signage and other measures will ensure continued enjoyment of the area by everyone. We are also mindful of the residents’ privacy.