Access: From the Trans-Canada Highway at the Banff East exit interchange, follow the Lake Minnewanka Road 3.5 kilometers (2 miles) to the Upper Bankhead Picnic Area. The trail begins at the far (west) end of the picnic area parking lot. Check trail conditions before you go. 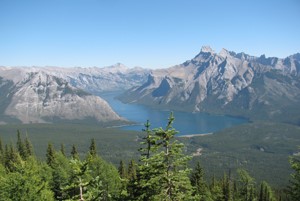 The C Level Cirque trail is one of the more attractive hikes in the Banff-Lake Minnewanka vicinity. In less than 4 kilometers it climbs past artifacts of the long-defunct Bankhead coal operation and a panoramic viewpoint for Lake Minnewanka to a high, rockbound pocket beneath the sheer east face of Cascade Mountain.

The trail begins its ascent through a pleasantly varied forest of lodgepole pine, aspen and spruce, where calypso orchids, blue clematis and many colourful violets bloom in early summer.

Within a half-hour you reach two skeletal buildings, the remnants of an anthracite coal operation that flourished in the area from 1904 to 1922. A town of nearly 1,000 inhabitants called Bankhead was spread across the valley where the trail begins, and these old buildings were a part of the "C Level" operation—the highest coal seams worked within the eastern slope of Cascade Mountain.

From a coal tailing pile 100 m beyond the buildings there is an excellent view out to Lake Minnewanka. As the trail climbs above the buildings and viewpoint, it passes by several fenced holes, which were once air vents for the mine shafts below.

The rest of the hike is a steady climb through forest until, 200 meters before reaching the cirque, views open down the Bow Valley to Mount Rundle, the Three Sisters and other mountains beyond the town of Canmore.

Cirque is a French word you will not likely find in your English dictionary—a term used by geologists to describe a semicircular, bowl-shaped depression created by an alpine glacier. C Level Cirque is a miniature example of the phenomenon. Though the glacier that produced the basin has long since disappeared, snow often lingers in the basin into midsummer. As it retreats, a carpet of yellow glacier lilies spreads across the damp, subalpine soil near its entrance. A tiny pond below the trail provides water throughout the summer, fed by the extensive snowfield on the talus slopes above.

From the rockslide at the edge of the cirque, a faint trail continues up to the right along a sparsely forested ridge to an even higher vantage point above the basin. However, most hikers prefer to "boot ski" the snowfield beneath Cascade’s cliffs or simply relax on a convenient rock to watch the antics of the local inhabitants—hoary marmots, pikas and golden-mantled ground squirrels.

Another local resident in spring is the wood tick, so no lounging in the grass! And be sure to check your body and clothes carefully following early season outings.

Originally published in 1971 and now in its 9th edition, this book details over 3,400 kilometres of hiking trails in Banff, Jasper, Yoho, Kootenay and Waterton Lakes National Parks.