"The nicest cemetery in Canada" 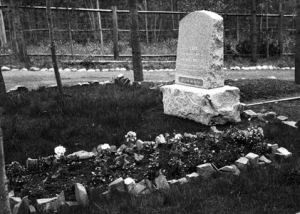 In 1890, baby Adelia Woodworth became one of the first Banffites to be buried in what is known today as the Old Banff Cemetery. Located at the south end of Grizzly Street, a 1914 Crag and Canyon article poetically described the cemetery as situated "only a short distance from the Bow Falls, with the craggy peaks of Mount Rundel [sic] casting fantastic lights and shadows over green swards and marble shafts, while the gentle soughing of the breeze through the pines chants a never-ending requiem.

This image is well represented in the memorials and tombstones, which reflect both the personalities of the people they commemorate and the landscape of Banff itself. J. E. Malloy, a stonemason, was responsible for shaping many of these early monuments, including the Brett Mausoleum and the Rawlins Monument. The Brett Mausoleum, which was constructed in 1914 and stands 12 feet high, features a locally sourced grey Rundlestone roof and polished marble interior. The Rawlins Monument, also constructed in 1914, features carvings of mountain scenery. Other tombstones depict golfers, horses, and cross-country ski tracks.

The Old Banff Cemetery also provided space for the nearby Bankhead mining community. Mourners would travel nearly nine kilometres on foot, often preceded by the Bankhead Mine Band, to bury their dead. The Bankhead Miners Memorial, which honours the fifteen miners killed over the town's 22-year mining history, is a reminder of both the miners and the former town's interactions with our community. 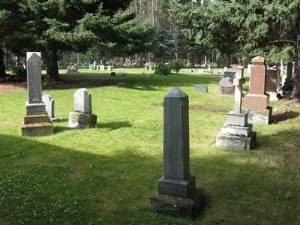 Throughout the years, the cemetery has grown and now provides a resting place for over two thousand local souls. Mary Schaffer Warren, one of Banff's pioneering female mountaineers, once lived opposite the cemetery. Although initially skeptical, she came to appreciate the location, describing the cemetery as a "place of rest and kindly neighbours". A Crag and Canyon article suggested that "no more fitting place could be chosen by an admirer of nature and her handiwork for that long, last sleep that knows no waking", while Jon Whyte, a Banff historian and poet, pronounced it "the nicest cemetery in Canada" .

The engraved tombstones hold the names of many of Banff's historic figures and community builders, but mingled among them are also those whose tales remain unknown. To celebrate this history, and recognize the varied accomplishments of the individuals buried here, walking tours are occasionally held and the Whyte Museum has produced an accompanying booklet. A description from this booklet notes that "when you share a cemetery you are part of a community and differences fade away". A fitting statement for a place that so strongly reflects Banff's people, landscape, and heritage.

In partnership with the Archives at the Whyte Museum of the Canadian Rockies, The Banff Heritage Corporation is proud to profile this significant heritage landscape as part of its Landmarks and Legends Series.

The Town of Banff Burial Site Location Tool is an interactive map you can use to search for a burial site by surname.