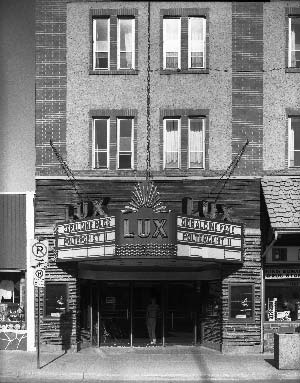 The opening of the Lux Theatre in May of 1913 marked the beginning of a new entertainment era in Banff. Constructed in the years before either radio or television was available, the theatre was the initiative of local legend, Norman Luxton. Located as part of the King Edward Hotel complex at the corner of Banff Avenue and Caribou Street, the theatre screened features, comedies and newsreels which would bring the world to this small mountain town. In its inaugural years the theatre was furnished with opera house seats from Chicago. Patrons would enjoy musical productions while film reels were changed, courtesy of an early victrola machine that played vinyl records. Later renovations saw installation of heavy curtains and upholstered seating for a capacity near three hundred and fifty guests.

Norman Luxton's brother George moved to Banff to manage the theatre. Subsequent managers were George Foulkes in 1921 and Frank Christou in 1925. A local social hub, the stage of the theatre was often used for Remembrance Day services, and occasionally hosted local entertainment such as English style vaudeville, a theatrical genre of variety entertainment comprising assorted acts grouped together on a single playbill.

The Lux theatre is thought to be one of the first cinema houses in Alberta to screen movies with fully synchronized sound in 1930. The films incorporating synchronized dialogue were known as "talking pictures" or 'talkies'. Then came Technicolor, a trademark process known and celebrated for its hyper-realistic, saturated levels of color film. These innovations increased audiences for the movies and contributed to the sustained popularity of Banff's Lux Theatre. 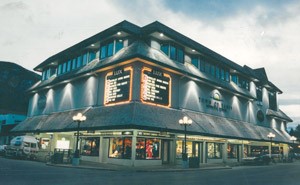 Successfully in operation until April 1987, the Lux Theatre moved from Banff Avenue to a new location on the corner of Wolf and Bear Streets. Still affectionately known as "The Lux", the existing local landmark opened in 1989 and has four separate theatres that provide daily screenings of popular new releases. The theatre also hosts feature evenings to showcase Canadian and foreign films, documentaries and special interest productions. The Lux remains a popular destination in Banff, especially for the Tuesday evening ticket deals and live broadcasts from the Metropolitan Opera in New York City.

In partnership with the Archives at the Whyte Museum of the Canadian Rockies, The Banff Heritage Corporation is proud to profile this signature local venue as part of its Landmarks and Legends Series. In recognition of the knowledge of Banff's history within the community, we welcome public input that may provide further insight into this or other profiles in the Landmarks and Legends series.