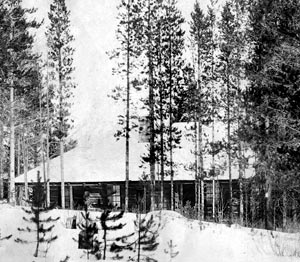 Lady Agnes Macdonald, the wife of Canada's first Prime Minister, was so enamoured of Banff during an 1886 transcontinental trip that she visited Banff regularly thereafter.

Each occasion was celebrated in a small cottage she called "Earnscliffe," after the barony in Scotland bequeathed to her husband by Queen Victoria.

After a few years Lady Macdonald leased this property from its owners, the Canadian Pacific Railway. The cottage remained in her estate until 1916.

Legend has it that the Baroness was an adventurous woman who possessed a combination of cultural propriety, flair and unbridled exuberance. She was known for her enthusiasm for peculiar feats, such as riding the cowcatcher (metal grille) on the front of Canadian Pacific rail locomotives.

The Earnscliffe cottage was built by Harry Abbott, General Superintendent, Pacific Division of the Canadian Pacific Railway. It was located adjacent to the Banff Springs Hotel, and constructed before its completion. Before the Baroness began visiting Banff, the first Park Superintendent, George Stewart, had already built a log home nearby which in time moved and became the first Park Museum.

Lady Macdonald spent the summers at the cottage with her daughter. While they were there, she combined her love for word games and her hobby of wood carving, and installed various carved inscriptions, sayings and riddles inside the cottage. 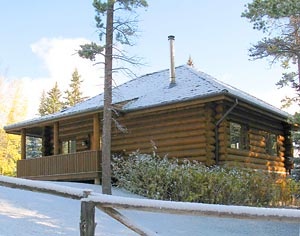 In the years following Lady Macdonald's visits to Earnscliffe, further toasts and tributes were added to the interior by her friends. Evidence of this still exists to this day, in the form of a poetic inscription atop the old fireplace.

During the years that the Canadian Pacific Railway owned both the Banff Springs Hotel and the cottage, the company made a number of additions, and the cottage was substantially renovated in 1974.

In recent years it has become the primary residence of a number of the hotel's managers.

The cottage still exists in excellent condition and is well maintained and preserved by The Fairmont Banff Springs as a significant historic resource of this town.

In partnership with the Archives at the Whyte Museum of the Canadian Rockies and the Fairmont Banff Springs Hotel, the Banff Heritage Corporation is proud to profile this significant heritage resource as part of its Landmarks and Legends Series.