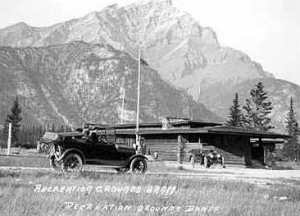 One of Banff's most controversial buildings was also designed by one of the world's most famous architects – Frank Lloyd Wright. As tourism was booming in the early days of Banff, Ottawa sought to establish the sophistication of the area by commissioning Wright, in collaboration with Canadian architect Francis Conroy Sullivan, to design a visitor's pavilion for the recreation grounds near the south end of the Bow River Bridge. Designs were completed in 1911, and the building was finished in 1914 for an estimated cost of $20,000.

Although the town's residents had unanimously proposed a multi-use winter sporting facility with curling and hockey rinks, Wright and Sullivan designed a prairie-style picnic shelter.

The pavilion was designed in Wright's rustic "Prairie" style, characterized by horizontal lines, low-hipped roof and overhanging eaves. The style was meant to interact between the outside and inside of a building a 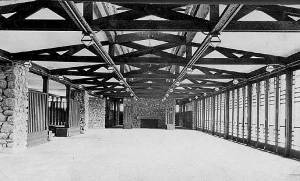 nd blend into the landscape. However, some critics have noted that the low-hipped roof was poorly designed for a snowy northern winter, although Wright did make concessions to the local environment by switching from a stuccoed exterior to natural materials such as cedar, spruce and local stone. The interior of the building consisted of one long room, flanked by separate retiring rooms for ladies and gentlemen. A row of "art glass" windows and an outside terrace looked towards Sulphur Mountain. The outside was landscaped with a large wading pool, and a canal-way for canoeists connected the grounds to the Bow River.

Scathing reports from the Crag and Canyon described the building as "neither ornamental nor useful", complained that the unheated building was only functional four months out of the year, and suggested that "the overlords of Ottawa" had ignored the town's wishes.

The rocky reception of the pavilion gave way to a sinking finish. The recreation grounds where the pavilion was located frequently flooded, and a 1933 flood caused severe structural damage. In 1938 the pavilion was demolished, and was later replaced with tennis courts and the current skateboard park. No traces of the building remain today.

The building's popularity seems to have benefitted from its demise. In the 1980s, rumours surfaced suggesting that the eventual demolition was accidental, an oversight by a careless foreman. A small committee advocating for its reconstruction was formed in the early 1980s, with the hopes of resurrecting the building as an interpretive and exhibition centre for Banff National Park's Centennial celebrations. Although funding for the reconstruction was never secured, the architectural world began to take an interest. Research located the specific site of the building, and a digital 3D model was created using Wright's old sketches. Even the Crag & Canyon, once the pavilion's harshest critic, described the building as a "magnificent monument to the genius of one of the world's great architects". 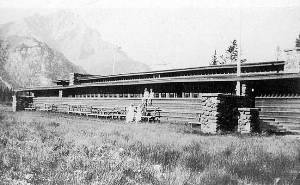 As one of only two Frank Lloyd Wright buildings to be constructed in Canada - the other, a private cottage in Ontario still stands - the Banff Pavilion is undoubtedly important architecturally. Although the building no longer exists, interested residents can still view a small model at the Whyte Museum of the Canadian Rockies.

In partnership with the Archives at the Whyte Museum of the Canadian Rockies, the Banff Heritage Corporation is proud to profile this iconic reminder of Banff's heritage as part of its Landmarks and Legends Series.