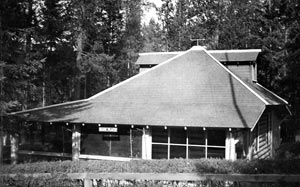 This modest cabin, located on the corner of Buffalo and Otter streets, was originally built in 1907 as a summer residence and rental property for a real estate agent from Calgary named Edward Henry Crandell.

The design of the 350 square foot cabin is influenced by the Folk House aesthetic. It is characteristically simple in form, and includes features such as a hipped roof and two gabled dormers. Interestingly, the vertical corner posts of the cabin are unique to the Rocky Mountain region, and were likely an early design element that has since become part of Banff's long-standing architectural tradition.

Foreshadowing the green building principles of today, the cabin was built almost entirely of locally-sourced materials. These include lumber from native tree species; and stone (both river and Rundle), used in the construction of an interior fireplace, as well as for landscaping around the site.

Evidence of yellowing on the logs used for the walls suggests that they may have been originally treated with linseed oil, a natural preservative and moisture protector derived from flax seed. 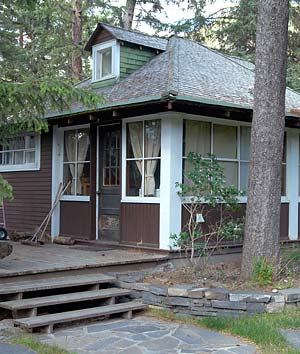 In 2007, Wilder and Davis Luthiers Inc. of Montreal purchased the 100-year old cabin on the corner of Buffalo and Otter Streets. Their intention is to restore the original log structure and construct a sympathetic addition on its north side.

Wilder and Davis eventually plan to establish a residence and violin workshop in the cabin, to service musicians who live in Banff, as well as those visiting the Banff Centre.

The Banff Heritage Corporation continues to work with the cabin owner to ensure that conservation efforts respect the heritage integrity of the original structure.