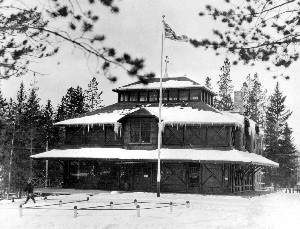 Built in 1903 and dignified with heritage status for being the oldest park facility in the Canadian National Park system, the Banff Park Museum is also the oldest natural history museum in western Canada.

Originally constructed on the south side of the Bow River, mounted and labeled specimens of flora and fauna were first provided from the Natural History Branch of the Geological Survey of Canada in 1895. Limited display space and the desire for a more prominent location may have prompted the decision to create a new facility, because a more central location was selected on the west side of Banff Avenue, across the Bow Bridge.

Legendary figure and local meteorologist, Norman Sanson, curated the museum from 1896 to 1932. He was instrumental in the management, expansion and presentation of the collection and exhibits. Sanson was not replaced after his retirement, and the collections we see today are largely characteristic of 20th century museum practices. 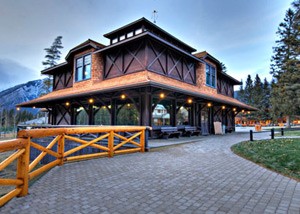 The Banff Park Museum continues as a prominent local attraction and landmark. Protected as a National Historic site, its original collection reflects and commemorates an early approach to the interpretation of natural history in Canada. Also, the architectural style and detailing of the building are characteristic of early federal buildings in the park.

The large windows, clerestory roof lantern and the cantilevered truss system which supports the second floor capture natural light and distribute space within the museum. The building is further defined by a layering of shingled roof surface and crossed-log veneer walls with protruding shingled bays at the mezzanine level. Fresh shingles and other recently completed exterior restorations have done much to celebrate the original beauty of this building, particularly showcasing the decorative construction and the rustic appeal of its original wood finish. The museum is open daily. For hours and admission fees see the Banff Park Museum National Historic Site of Canada web site for information.

In partnership with the Archives at the Whyte Museum of the Canadian Rockies, the Banff Heritage Corporation is proud to profile this national site of significance as part of its Landmarks and Legends series.