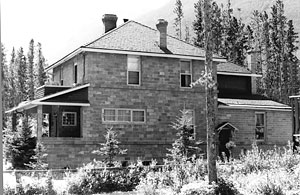 Stately red clay tiles distinguish the house at 119 Spray Avenue. It is a Banff home with special significance to the town. It was originally the home of Dr. Gilbert Atkin, a prominent family physician much loved by early Banff residents.

Dr. Atkin came to Banff in 1905. He leased this property with his wife Eva in 1910 and together they raised three daughters there.

Their home was one of the first to be built on Spray Avenue, and one of the few original brick houses built in Banff circa 1911. It is also the only one that features clay tile cladding.

Its design is sometimes referred to as the "American Four Square," a common prairie vernacular, with an open veranda and wide front steps. It was considered very stylish and elaborate in its day.

Between house calls and patients, Dr. Atkin was a friend to many in the community. He found time to pursue his love of nature. He hiked the trails of the National Park regularly, and was seen often with his fishing pole, trying his luck in the Bow River.

Atkin initially worked with pioneering Banff physician and former Lieutenant Governor of Alberta, Dr. Brett at the Brett Sanitorium. He later opened his own clinic at 94 Banff Avenue, where the Banff Book and Art Den is now located. 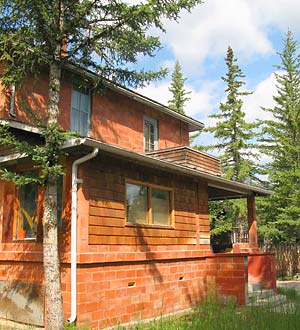 Somewhat hidden behind a high hedge, the signature red tiles still give the Atkin home a sense of place on Spray Avenue.

It continues as a private residence and is well maintained by its present owner.

While the house may no longer receive the fashion status it enjoyed in its heyday, the building still has charm, and continues to be revered by many for its important association with the legendary characters of Banff's history.