The Town of Banff is pleased to announce the completion of the utility pipe crossing and pedestrian bridge. While flooding delayed the bridge opening event, the bridge itself was not damaged from high water. The bridge opened July 2, 2013, three months ahead of schedule.

Some Facts About The Bridge

Aging sewer pipes, installed some time before 1968, carry all sanitary waste from the north side of the town under the Bow River from the south end of Muskrat Street to Glen Avenue. An investigation in late 2010 showed they needed to be replaced as soon as possible.

Several replacement methods were analyzed, and the solution of raising the pipes over the river, attached to a pedestrian bridge was approved by Council.

The total approved budget for the project is $6.806 million. The raised pipe/pedestrian bridge is eligible for a $370,000 transportation grant.

Council first considered the sewer pipe replacement/pedestrian bridge concept on May 9, 2011, approved it on July 18, 2011, and again on December 14 with the approval of the 2012 to 2021 capital plan. On January 23, 2012 Council authorized staff to proceed with the design-build proposal supplied by StructureCraft Incorporated. After the April 10, 2012 briefing on a further investigation of direct drilling (trenchless option), in response to requests from a group of residents, Council indicated they preferred to proceed with the raised pipes/pedestrian bridge option. 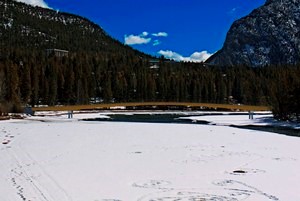 Design features include low-rise span to protect views, wood and stone construction, minimal change to trail alignment and grade and low lighting. In case of emergencies on the south side of Banff, the bridge can accommodate an ambulance or a rescue truck, though not a fire truck loaded with water.

StructureCraft’s previous projects include the wood wave ceiling in the Richmond Olympic Oval and Princeton’s pedestrian Bridge of Dreams.

Connecting to the Community Plan

A pedestrian bridge meets many of the goals in the Banff Community Plan. It encourages and complements walking and cycling, which reduces greenhouse gas emissions; encourages active living; enhances the resident and visitor experience and amenity offerings; and is a reinvestment in vital infrastructure.