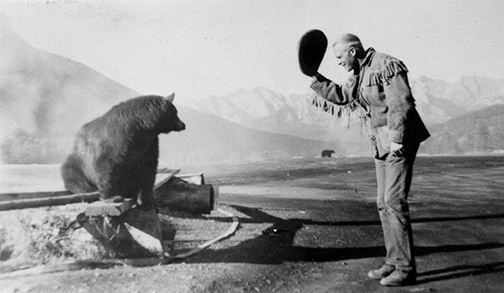 The scene is set. Conrad rushes back to his home near the Austrian-German border, throws the door open and dashes to the phone. Moments ago, one of Conrad’s informants had disclosed the news that Germany’s Nazi army was approaching the Austrian border.

At the risk of exposing his identity as a spy and imploding his network of contacts, Conrad makes the difficult call to MI6 headquarters in London, announcing the German invasion. “My aunt has arrived,” he exclaims over the phone, a code for “The Germans are coming.” This phone call saved many lives, but heralded the start of the Second World War. This moment on March 11, 1938, is one of several occasions that positioned Colonel Conrad O’Brien-ffrench in the midst of a major global event.

Conrad O’Brien-ffrench played a role in some of the 20th Century’s most significant developments, including the First World War, the beginning of India’s fight for independence, the establishment of Communist Russia and the Soviet Union, and the German invasion of Austria at the onset of the Second World War. Eventually settling down in Banff, this real-life ‘International Man of Mystery’ lived a life widely considered to be one of the true influences for the fictitious James Bond character, created by Ian Fleming.

I – From Canada with Love Conrad was born on November 19, 1893, in London, England, into an affluent family that spent much of his childhood at a villa outside of Rome.1 Along with his older brother, Conrad learned English, French, and Italian before returning to England to attend college. His life took a tragic turn when his brother died from an accident playing football, forcing him to leave college and return to farming in the West Midlands. During this time, he met a man from Buffalo Lake Ranch in Saskatchewan, who told him about the thrilling vastness of Western Canada.2

At the young age of 17, Conrad travelled to Saskatchewan where he joined the Royal North- West Mounted Police. It is here where Conrad first experienced life on Canada’s ‘wild west’ frontier. In 1910, Alberta and Saskatchewan had only been part of Confederation for five years. Taken aback by the rugged landscape, Conrad wrote: “Here in the west it was each man for himself and a question of survival.”3 Unfortunately, tragedy struck again when he received news that his mother was ill, cutting his time in Canada short.

II – Licence to Kill Upon his return to England, Conrad tended to his sick mother. She died the following summer in 1913.4 Like most young British men in the mid-1910s, Conrad joined the military with the shadow of the First World War looming over Europe. Under the Royal Irish Regiment, he was quickly promoted to the rank of Captain.5 He led his regiment into the war’s first major action in the infamous Battle of Mons. His recount states: “Deadly detonations cratered splattering earth in all directions. The noise was deafening. Within a few minutes, not a single officer in my Company remained.”6

On the first day of the battle, Conrad was badly injured, and taken as a prisoner of war. After several escape attempts, Conrad was moved to Augustabad (Neubrandenburg), which was considered an inescapable fortress.7 It is here where he began to exchange letters with Cathleen Mann, a friend from home and the secretary to Stewart Menzies, a British counterintelligence officer. Through invisible ink, Conrad transmitted information on German activity including bomber prototypes, troop movements, and other strategic information.8 Although Conrad spent the remainder of the war in captivity, his correspondence proved to be invaluable. He even learned Russian fluently from other prisoners.9 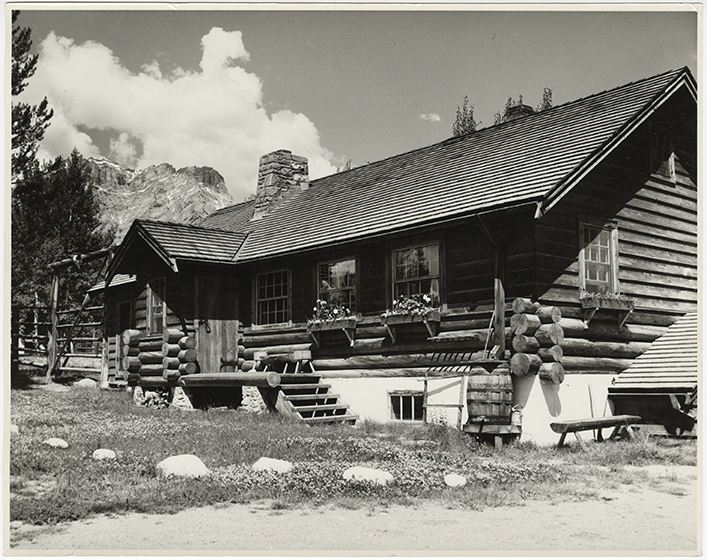 III – International Man of Mystery By December of 1918, the First World War had ended, and Conrad returned to England. Stewart Menzies, the counterintelligence officer, requested to meet Conrad. Menzies asked Conrad to join the British Secret Service known as MI6. Although the war was over, Germany, Eastern Europe and Russia remained politically chaotic, justifying the need for the continuation of the Britain’s intelligence activities.10 Conrad’s multi-lingual and espionage capabilities proved useful to MI6. In 1920, he was assigned to escort the important Russian diplomat Leonid Krasin to a covert meeting with then British Prime Minister Lloyd George. Conrad led the diplomat through Europe from recently independent Finland to London, where talks were held to establish a trade relationship with Soviet Russia. This was the first in-person meeting between the outside world and Communist Russia, setting the stage for an Anglo-Soviet Trade Agreement.11

A few years later in 1922, Conrad was dispatched to British-ruled India, where he served as an escort for the Royal Family who were touring the sub-continent. Conrad experienced firsthand India’s growing civil and political opposition to colonial rule, led by prominent figures, most notably Mohandas Gandhi. Conrad was privy to Royal meetings that called for the arrest of Gandhi, which occurred less than a month later. The harsh response of the British to the non-cooperation movement contributed in part to the end of the British Raj. Conrad witnessed the transformational character of Gandhi’s fight for freedom, and Great Britain’s eventual relinquishing of control to Indian independence.2

IV – Die Another Day Upon returning to England, Conrad left the secret service. After a short hiatus he was again convinced by his friend Stewart Menzies, who would soon become head of MI6, to join the reformed British Secret Intelligence. Conrad was tasked with helping to establish a spy network in Austria and Southern Germany, internally dubbed the “Z” network. As part of the operation, Conrad was to pose as the ‘playboy’ owner of an Alps touring company, under the name the Tyrolese Tour Company, based in the Austrian village of Kitzbühel. Conrad was part of several pseudo businesses that operated as a front for an intelligence network. It is during this time Conrad would brush shoulders with other MI6 agents as well as then-journalist Ian Fleming, who would later become known as the author of the James Bond series. Ian and Conrad had multiple interactions during this time, sometimes at local taverns, on the ski slopes or even at the lavish parties of mutual friends.14

Initially, Conrad provided information on the rise of Nazism and Hitler’s totalitarian state, and later the bolstering of German forces in preparation for a Second World War. On March 11, 1938, Conrad received a message from one of his contacts living on the German border. This moment described at the beginning of our story is akin to the climax of an espionage movie. The threat was imminent, and Conrad made the brave decision to expedite the information back to England, knowing it would expose his identity. This act proved to be crucial in saving many lives and gave individuals a window of time to pack quickly and leave. Less than 24 hours after receiving the message, German troops had entered Kitzbühel.15 Now compromised, Conrad returned to England and remained a known target of the Axis powers. He was even named in the ‘Black Book’ of Himmler’s Gestapo, which compiled more than 2,300 names of the most wanted Britons. Conrad was listed as person of interest 112, right beneath the name of Winston Churchill.16

V – The Spy Who Loved Me Beyond his military and espionage skills, Conrad was accomplished in mountaineering, which he was first exposed to during his time in India. He led expeditions into the Himalayas and later the Austrian Alps. Following the Second World War, Conrad began a quieter life and took up painting and other creative pursuits. His first marriage lasted only three years, however, in 1945, Conrad remarried to Rosalie Isabelle Baker and together they moved to Vancouver. Before settling in Banff, Conrad would visit the region often. According to a 1970s article, it is possible that Conrad’s espionage work was not over. During one of his trips to Banff, Conrad made an unscheduled journey to the Sunshine Ski Resort for the day, before quickly returning  to Vancouver. The following day, several RCMP officers travelled to Sunshine Village and arrested two German nationals.17

However coincidental this series of events may have been, Conrad’s mysterious persona had not escaped him, even in Canada. Conrad and his wife, Rosalie, moved to Banff in 1946 and began work on a land claim of 116 acres located on the outskirts of the old town site of Anthracite. Conrad had quietly staked his claim on a sizable tract of freehold land prior to the Second World War.18 In a later memoir, Conrad admits that his land claim in the centre of Canada’s first national park was no ordinary one. He notes that no one seemed to realize that the freehold title even existed and when the Parks Canada authorities heard of the purchase, they were angry.19

Regardless, Conrad set up essential services such as electricity, a water system, a pump, drainage, and a sawmill. During this time the couple stayed at a hotel in town and after spending a small fortune on accommodation, decided to build a cottage to live in while the construction of the larger Fairholme Ranch took place. Once a suitable spot for the cottage was chosen, the arduous task of clearing the land began. As soon as frost was out of ground in the spring of 1947, Conrad and his builder friend, Harold Fuller, began the construction of the cottage. The pair struggled to find suitable workers to help, yet by September the duo had completed the cottage. Work continued throughout the winter, mostly on the preparation of logs for the upcoming construction of the ranch. After several grueling months of work, the Fairholme Ranch was completed on June 1, 1948.20

The ranch was exceptionally well constructed and included an open rundlestone fireplace and several guest bedrooms.21 This new life was a considerable change of pace for Conrad—raising horses and teaching at the Banff School of Fine Arts. The ranch was visited frequently by British dignitaries traveling to Canada, including a Royal visit.22 During the summer of 1958, Princess Margaret spent several days at the ranch, which had an excellent view of a mountain that was subsequently renamed Princess Margaret Mountain, in honour of her visit. The Fairholme Ranch was purchased by the federal Parks Department in 1959, and later disassembled and relocated to an acreage outside of Stony Plain.23 The remainder of Conrad’s life was spent painting, teaching, and studying philosophy. Although Conrad may not be considered a founding member in Banff’s history, his return to Canada and eventual settling in Banff speaks to the region’s powerful attraction. Having travelled and worked all over the world, Conrad chose here to find peace. His legacy adds to the rich and storied tapestry of individuals who have called Banff home. Perhaps James Bond, too, would have chosen to nestle in the mountains to hang up his hat. 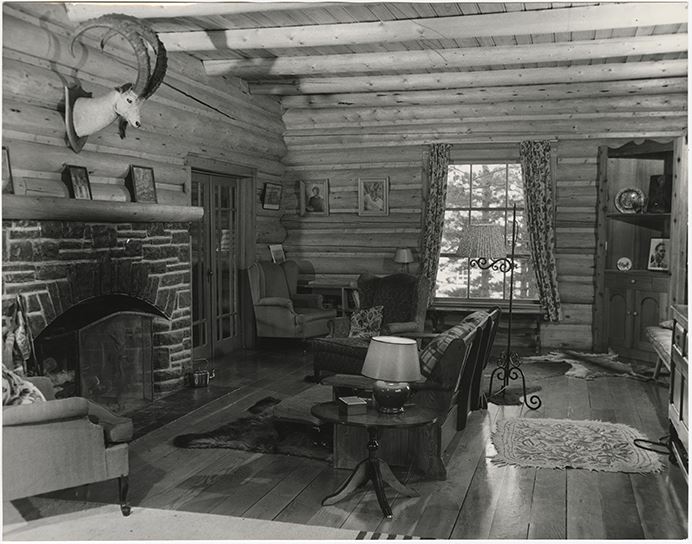