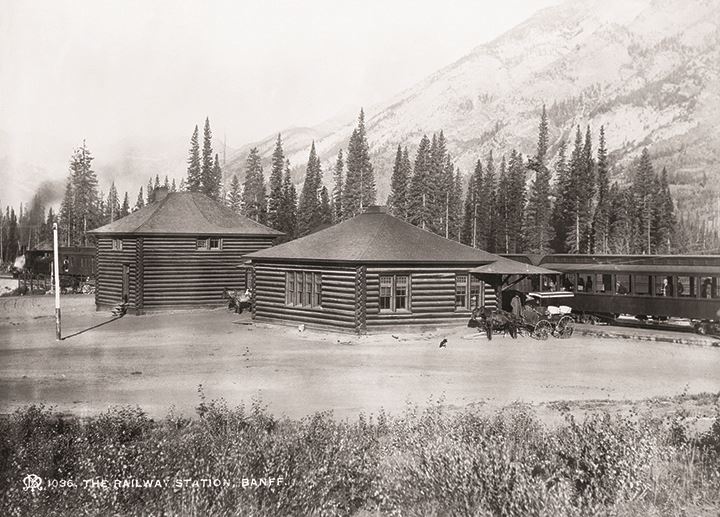 Since time immemorial, Indigenous people have gathered, camped, hunted, and healed at the foot of a mountain noted for cascading mînî hrpa (waterfalls). Bison and other wildlife roaming the nearby prairie and meadows were a part of Indigenous sustenance, spiritual, and cultural practices of the land.

European explorers, yet unaware of the nearby hot springs, mentioned the waterfalls as the surrounding area’s most prominent feature. Sir George Simpson trekked through the area in 1841 and Sir James Hector of the Palliser Expedition camped in 1858. Surrounded by sheer vertical mountain cliffs, the grasslands, aspen forests, and meadows would set the stage for the introduction of steel rails and iron horses cutting a lasting path to eventual permanent settlement.

The modern settlement period of Banff began with the arrival of Canadian Pacific Railway (CPR) surveyors in 1881. Major A.B Rogers headed a party of 75, including explorer-outfitter Tom Wilson, surveyor Aeneus Shaw, and chief-surveyor Frederick Aylmer. Their task was to find a suitable route through the mountains from their base at Kananaskis. Having trekked along the steep cliffs by the Bow River on the Mount Rundle approach and passed near the future townsite, the survey team’s plan for the railway tracks included a 275 metre tunnel through an adjacent peak named Tunnel Mountain (known as Sleeping Buffalo Guardian Mountain to the Stoney Nakoda people). A folly that would bankrupt the CPR, General-Manager William Van Horne was furious and had his surveyors locate a route around the mountain. This brought the rail to the area at the foot of Cascade Mountain.

Along with the new tracks and trains came the towns; and railway sidings which were consecutively built at 10-mile intervals westward from Medicine Hat (Siding 1) to Lake Louise (Siding 33). As part of the CPR’s Mountain Division of the transcontinental railway, Siding 29 was located near the foot of Cascade Mountain. Following the laying of the siding track on October 27, 1883, a section house, privy, and a small log structure constructed by the CPR railway crews sprang up nearby. David Keefe would become the first railway section foreman of Siding 29.On an early November day of the same year, railway workers Franklin McCabe, and William and Frank McCardell would come across hot springs at the foot of Sulphur Mountain, where the Cave and Basin National Historic Site stands today. Siding 29 was quickly renamed Banff on November 25, 1883, in recognition of CPR President, George Stephen’s birthplace. The settlement was located near the present bend in the Trans-Canada Highway, northeast of the intersection of Hawk Avenue and Compound Road. It was adjacent to the meandering Whiskey Creek which ran through the flat prairie and meadow between Cascade Mountain and Tunnel Mountain, then named Aylmer Peak.

The year 1885 would be momentous for Canadians from coast-to-coast with the completion of the transcontinental railway, and the establishment of the Hot Springs Reservation. Knowledge of the hot springs rapidly spread among railway construction workers along the line. Strangely, McCabe and McCardell expended little effort in protecting or developing their interest thoroughly. One of the most enterprising was David Keefe, who, in October, 1884, on information supplied by McCabe, located the Upper Hot Spring and cut a trail up the slope of the mountain above the Spray River.

Shacks were erected at the hot springs in 1884 and 1885 by Theodore Sebring, George Whitman, and Frank McCabe among others. By late summer in 1885, officers of the Department of the Interior in Ottawa were giving serious consideration to the preservation of the hot springs from excessive private development, which had been occurring in similar locales such as Hot Springs, Arkansas and various European spas. On November 25, 1885, Order in Council No. 2197 received approval. Under its provisions, an area of approximately a little more than 26 sq.km. on the northern slopes of Sulphur Mountain was set aside for future park use against “sale, settlement, or squatting.” With the decision by the government to set aside the hot springs for public use, work on development of a new townsite oriented towards the hot springs began. 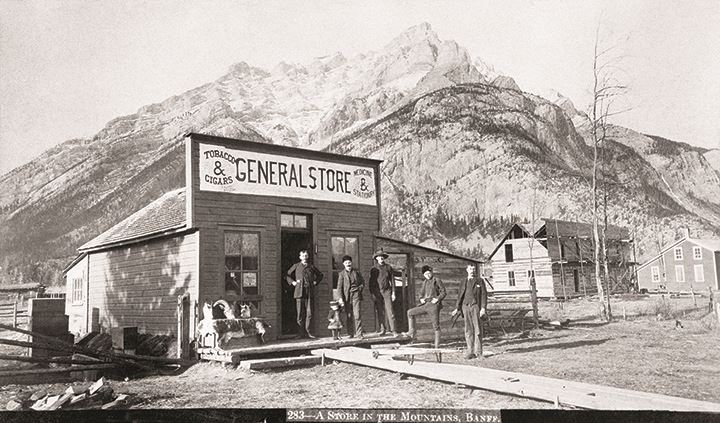 Up until the spring of 1886, no year-round permanent residents were found in the area except for railway maintenance workers living in the section house at Siding 29, but the summer of that year brought intense development and activity due to the ownership claims staked on the hot springs. George A. Stewart, surveyor and first park superintendent, was appointed to carry out the first surveys of the park and the future townsite to attract the wealthy and well-travelled tourists of the Victorian era. Pitching a tent beside the Woodworth homestead near the Cascade Waterfall, he and three assistants would eventually lay out the north side of the new townsite in a typical prairie fashion of small lots laid out in a grid pattern anchored by the presence of Cascade Mountain. On the south side of the Bow River, Stewart allocated large “villa lots” for hotels, sanatoria, hospitals, and wealthy vacationers.

Located 2.5 kilometres northwest of the newly surveyed townsite lots, Siding 29 grew to service the new hot spring community as several stores had been erected on the north side of the tracks. A general store was owned and operated by W.R. Roberts, then by Calgary-based merchants Ferland & Co; there was a butcher shop run by Dunn & Lineham; a furniture store run by Tom Winnett; a jewellery and watch repair shop, a billiard saloon run by Pat Quinlan; a lumberyard run by S.J. Hogg; Ed and Jack Rowe’s livery stables; David Keefe and his brother ran the Banff Hotel & boarding rooms out of the CPR section house; and Leonard C. Fulmer had a lumber yard and store. Carlin, Lake & Lafayette French had a store on the road south of the tracks where they sold groceries and dry goods. Most of these establishments were hastily put-up log buildings, alongside the railway tracks or the road that led from the section house towards the Bow River. Despite the ongoing surveys for the new townsite being completed by Stewart, most residents contended that Siding 29 would continue as the main service centre for the area.

Of note, Frederick Woodworth became the first postmaster of Siding 29 on June 1, 1886, independently operating until 1888 out of a two-storey log cabin he built with his brother, Benjamin Woodworth. They were the sons of Douglas B. Woodworth, a Member of Parliament from Nova Scotia. This was to become historically significant to Banff as his residence, Tanglewood, remains the oldest designated surviving structure of Siding 29. It stands today on Beaver Street as a Municipal Historic Resource.

By December 1886, the CPR informed the Department of the Interior in Ottawa of a proposal to relocate the divisional point of the railway from Canmore to Banff. One hundred and sixty acres of land at the northern end of the newly surveyed townsite at Forty Mile Creek was leased to the railway company for the creation of station grounds that would house substantial and attractive station buildings. This announcement would precipitate the shift from Siding 29 towards the new townsite.

The Rocky Mountains Park Act enacted on June 23, 1887, created Canada’s first national park within a 688 sq.km. boundary under the direct administration of the Ministry of the Interior. By late 1887, approximately 300 people resided in the fledgling townsite by the Bow River while 50 people still lived around the Siding 29 settlement. Around this time, a new post office was established at the townsite with Richard O’Donaghue as postmaster, and the original post office at the station would only remain for another year with Richard Frank as the next postmaster. The offices were given the postal addresses of national Park, Alta. and Banff, Alta; thus, hastening the divide between the “new” and “old” Banff.

During a tour of the newly under-construction Banff Springs Hotel in spring of 1887, CPR Vice-President William Cornelius Van Horne was asked about plans for a new railway station. Showing his wit and speed of response, he snatched a piece of brown paper, sketched some rough lines in the shape of a log chalet and replied to the inquirer, “Lots of good logs there. Cut them, peel them, and build your station.” The rustic appeal of log construction and the trend for purposeful nature vacations in the mountains during the late 1880s meant that log railway stations became a key component of drawing in wealthy British and American tourists into luxurious new hotels. Van Horne’s focus on tourism in Banff as an avenue to reducing company debt and operating costs was exemplified by his proclamation, “If we can’t export the scenery, we’ll import the tourists. ” This action would serve as the end-of-the-line for Siding 29 and its residents, and the beginning of modern tourism in Canada. 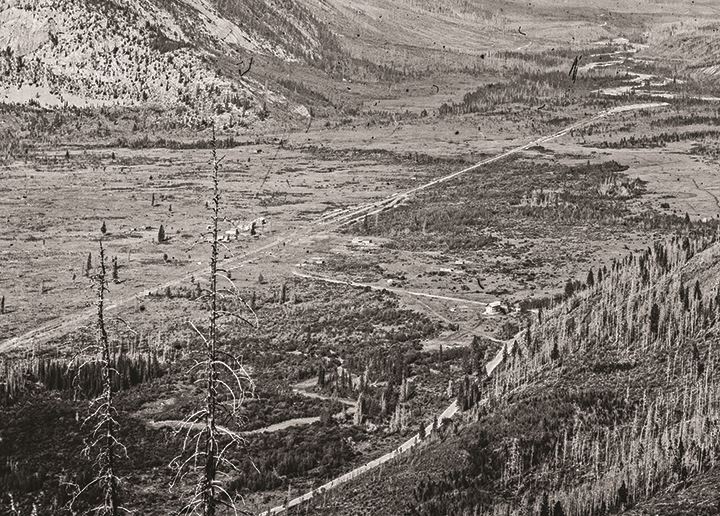 In May 1888, work was well underway to relocate the station to the current grounds near Forty Mile Creek and Lynx Street some 2.5 kilometres west of Siding 29. The new location provided direct service to the new townsite supporting a visitor count of over 3,000 in the park, and it was crucial in the construction of the Banff Springs Hotel. Towards end of the year, a simple wooden shed structure and box-car housed the limited CPR facilities at Banff. Calling it “cow-shed” and “band-box,” many newly arrived tourists were disappointed at the simplicity of the temporary facilities which could not provide a good first impression and high visual appeal when they stepped onto the platform. The original CPR section house at Siding 29 which was used for track maintenance along the line was moved to its current location on Mountain Goat Lane between mid-1888 and 1890.

Between November 1889 and April 1890, the CPR station was constructed by Winnipeg-based contractors Peter McDarmid & Co. with logs supplied from the Eau Claire Lumber Co. which controlled the production of timber in the national park on the Bow and Spray Rivers. The station was designed to create an air of comfort and closeness to nature. Rounded, peeled logs formed the walls and slender poles were used to support canopy brackets and the station name plaque. The two wood structures were capped with bell-cast hip roofs and joined by a trackside canopy. Door and window openings were framed with log jambs and heads. The windows were of the standard double-hung variety with transoms. It was designed by Edward Colonna, a prominent designer with the CPR who was a leading advocate of Art Nouveau principles and railway chateau infrastructure in Canada. In a five-year period from 1889 to 1893, Colonna would design coaches, sleeping cars, and dining cars to be exhibited at the 1893World’s Fair. He would also design railway stations at Lake Louise, Calgary, Brandon, and Windsor. In 1893, Colonna moved back to Europe to work under Siegfried Bing at Maison de l’Art Nouveau gallery in Paris.

With the new station complete, most of the people remaining in Siding 29 relocated to the townsite as the old settlement was quickly abandoned. Frederick Woodworth moved his residence and former post office to the townsite between 1888 and 1892. Many others dismantled their dwellings and re-purposed the materials for other projects or left the area. Siding 29 was completely abandoned and almost no traces of the site remained towards 1898.The grounds became part of the park’s animal paddock which was used for the display of captive bison. Benjamin Woodworth lived at the caretaker’s residence between 1910 and 1920. The site was a familiar stopping point on the route to Lake Minnewanka. After closing in 1997, Parks Canada removed most of the infrastructure in order to enhance the Cascade Wildlife Corridor. 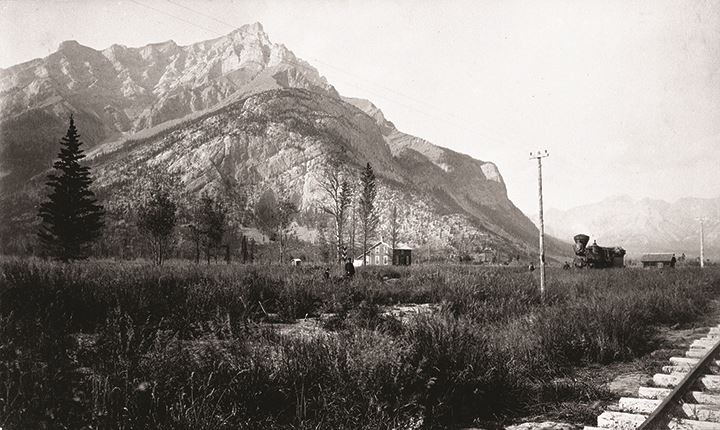 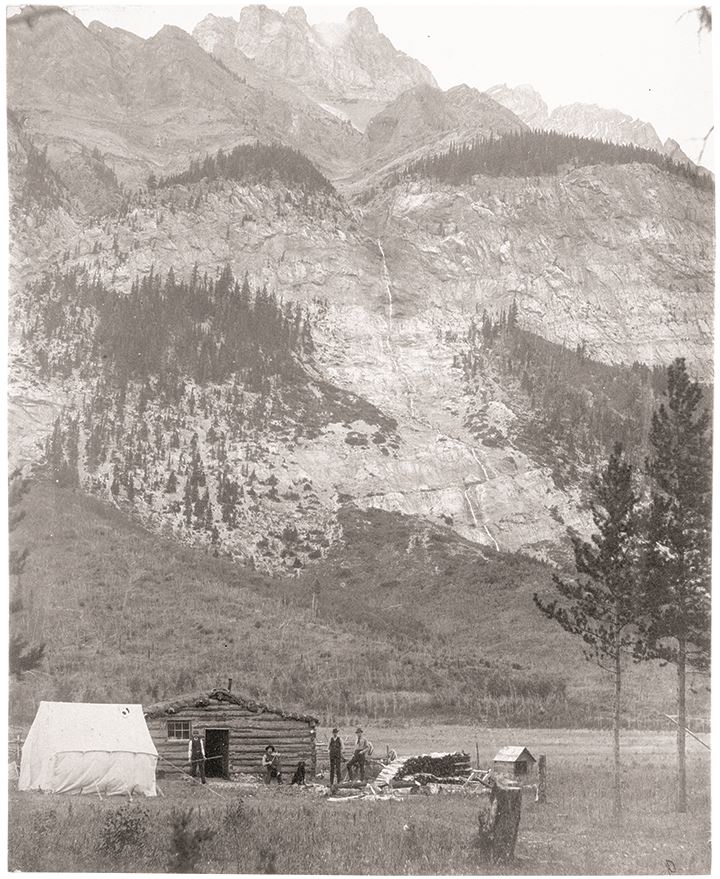