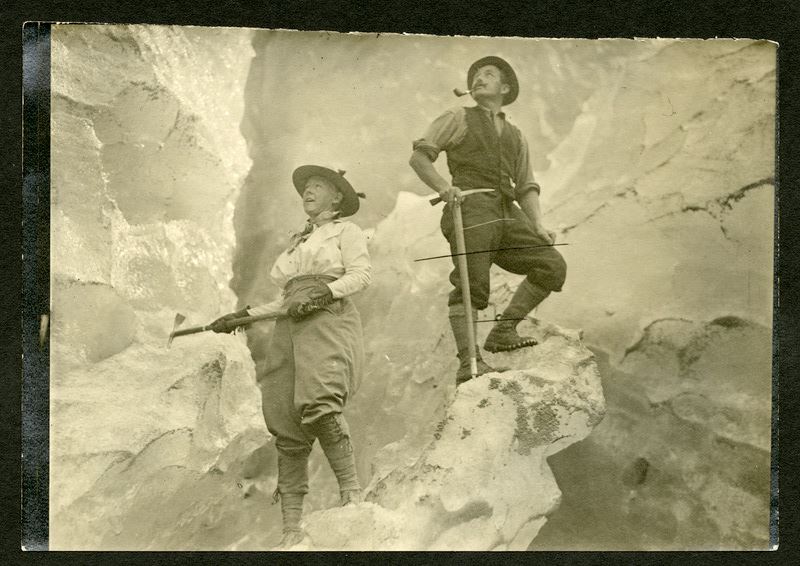 If you’ve ever heard of mountaineer Mary Vaux Walcott, you know that it would be a difficult task to find a woman in the late 19th and early 20th centuries who was more ahead of her time. A pioneer in photography, glacial studies, and mountaineering, Mary Vaux Walcott navigated life with an inexhaustible joie de vivre in face of the narrow limitations imposed by that era’s gender roles.

Born to Sarah and George Vaux in 1860, Mary grew up in a prominent Quaker household in Philadelphia, which was just a day’s carriage ride away from active battlegrounds of the American Civil War. Despite the Vaux family’s high social standing and affluence, the family lived a humble Quaker lifestyle. Above all, they valued modesty, devotion to God, and the pursuit of knowledge. The Vaux’s Quaker upbringing afforded Mary and her two brothers, William and George, a high level of education, especially in the sciences. However, following the early death of their mother, the duties of running the household and family farm fell upon Mary’s shoulders, preventing her from attending university despite her clear talents in math, science and art. 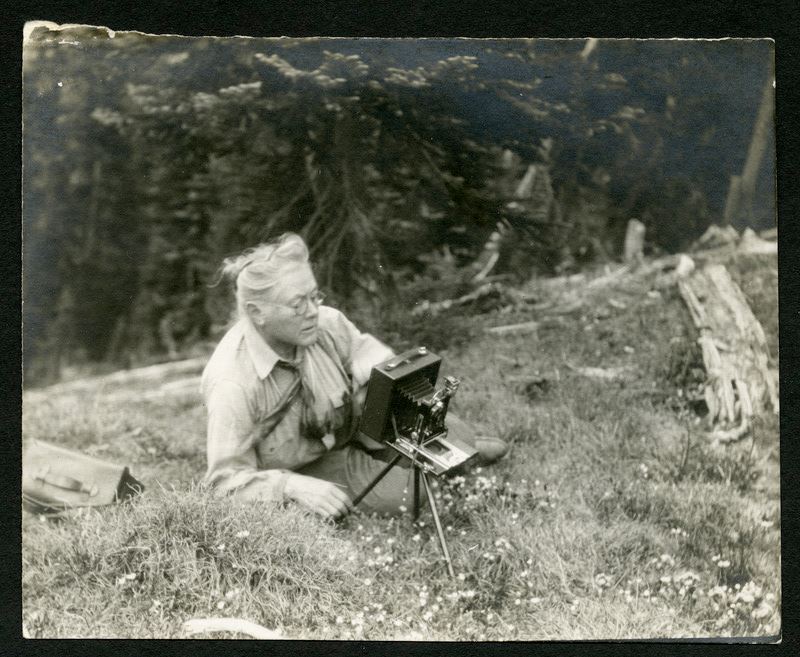 The family’s shared interest in the natural sciences would eventually attract the entire Vaux family to the Rocky Mountains. In 1887, at the age of 27, Mary first travelled to the Rocky Mountains with her adventurous family who were returning east after a long trans-continental rail journey. The family were among the first wave of travellers to ride the newly-constructed CPR which stopped at the now extinct Glacier House Hotel in the Selkirk Mountains. They were fascinated by the nearby Illecillewaet Glacier, where Mary and her siblings set out, equipped with an ingrained sense of Quaker rationalism, to understand the landscape and to photograph, sketch, and measure the glacier before continuing east.

It would be seven years until the Vaux family returned, whereupon they discovered that the Illecillewaet Glacier had receded considerably in the time they had been away. Enthralled by the mystery of it, these young Philadelphians realized the importance of documenting the change, and returned summer after summer for decades to come for annual glacier measurements. To put the retreat of ice in perspective, what was once a 30 minute walk to the foot of the glacier is now a four hour trek. Pre-dating the acceleration of “climate change” by nearly 80 years, the Vaux’s body of work on the Illecillewaet Glacier proved to be the first thorough record of glacial studies in Canada.

From the years 1897 to 1912, the Vaux siblings made approximately 2,500 photographs of the “Canadian Alps.” Their early photographs and findings on local peaks and glaciers were published in numerous CPR pamphlets and presented at various artistic and scientific forums. At the time, creating art for art’s sake was understood to be frivolous and unnecessary by the orthodox Quaker community. However, photography for the sake of scientific achievement was the perfect motivation to avoid judgement. Of the three siblings, Mary proved the most talented at the photographic arts – which, like almost everything at the time, was a domain dominated by men. Though an equal and active contributor to the work on glaciers, Mary’s role took place primarily in the dark – indeed, often quite literally in the dark room. She was among the first female members of the Philadelphia Photographic Society and a forerunner of the photo-secession (fine art photography) movement. Mary was also a master of the platinum photo printing process, and was known to fashion makeshift darkrooms in mountain campsites and challenging outdoor conditions. You can see her work today at the Whyte Museum Archives under the Vaux Family name. 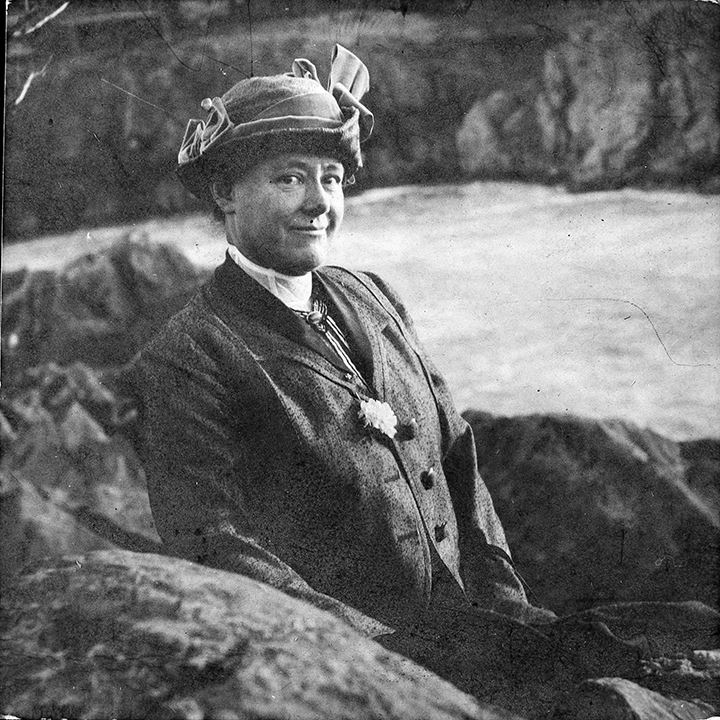 All the siblings were founding members of the Alpine Club of Canada and collected numerous claims to notable early climbs, but as if to mark the new century for the rise of modern women, Mary became the first woman in Canada to ascend a mountain over 10,000 ft. when she climbed Mount Stephen in the summer of 1900. Her 40 years of experience mountaineering in the area earned her a number of other firsts – first white woman to hike Yoho Valley, to climb over Abbot Pass, and to explore the Deutschman Caves, along with close friend Mary Schaffer. While Schaffer, the Philadelphia compatriot turned local legend, is famous in her own right, it is rumored that it was Mary Vaux who first introduced Schaffer to both the Rocky Mountains and the lantern slide photographic style – the style for which she became so well known. The Vaux family also developed close friendships with the likes of Byron Harmon, A.O. Wheeler, Tom Wilson, Bob Campbell, Tom Martin, and many more during their annual stays at the famed Glacier House.

Mary took over the family’s glacial studies completely after 1911. The tragic death of her youngest brother William, in 1908, and the growing demands of her other brother George’s life and career in Philadelphia left Mary to continue the annual trips to the Rockies alone, joined only occasionally by her father and brother. But she was not opposed to the solitude of the mountains. Mary continued to return to the area and took up her old practice of watercolour painting. Much like the glacier studies, she found purpose in using her skills as an artist to advance her understanding of the natural sciences. As the years went by, she amassed several hundred realistic paintings and an abundance of information on alpine wildflowers, which were later bound into a very successful series of botanical illustrations. Her 1925 book, North American Wildflowers is a seminal work in the world of botany and has been published in multiple editions by the Smithsonian Institute. Around these parts, the Alpine Club crowd fondly referred to her as “the Artist.”

Mary remained single for the majority of her life. Much of her time was devoted to her aging father, whom she cared for almost her entire adult life. In a belated rebellion against his wishes for her to marry a Quaker, she married well-known paleontologist Dr. Charles Walcott. Friends for years prior to their marriage in 1915, the two had met in Field during Dr. Walcott’s famous discovery of invertebrate fossils in the Burgess Shale. Sharing a love for science, art, and the mountains, the pair travelled to the mountains from their home in Washington, D.C. every summer well into their old age. 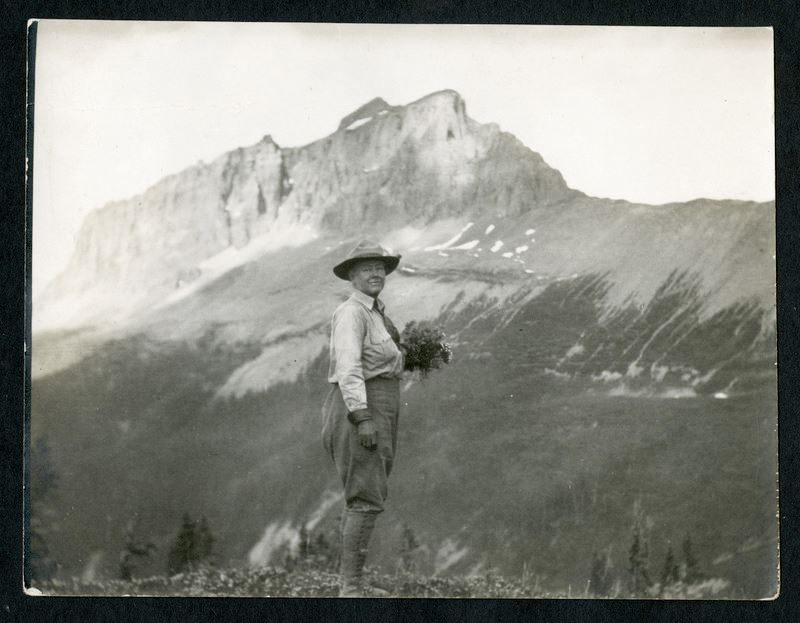 The latter half of Mary’s life was spent primarily between the rugged mountains of the West and starkly-contrasting lunch parlours of the Washington elite. Vivacious, generous, and at all times productive, she divided her time between various causes and clubs. She lectured on botany and photography for crowds of up to 3,000 people, was an active member of the Alpine and Trail Riders Clubs, a member of the Academy of Natural Sciences, President of the Society of Women Geographers, and a member of the Federal Board of Indian Commissioners.

With a long and varied list of achievements to rival any Renaissance man, Mary Vaux Walcott has certainly earned the title of local legend. She is recognized for her vital contributions to the Vaux family’s glacial studies, her accomplishments as a seasoned outdoorswoman, as well as her success as a botanical artist and community leader. A truly remarkable woman, her name lives on through a landmark, Mt. Mary Vaux, a 3,208m summit located in Jasper National Park from which you can view the magnificent panorama that captivated its namesake for over 40 years.