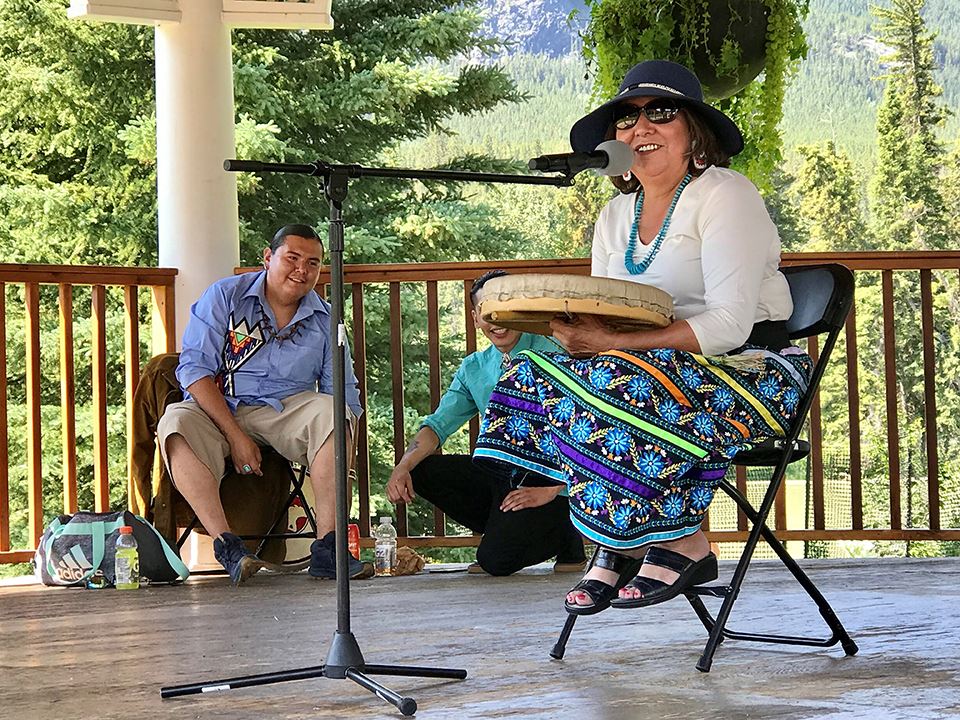 "Indigenous peoples" is a collective name for the original peoples of North America and their descendants. Often, "Aboriginal peoples" is also used. The Canadian Constitution recognizes three groups of Aboriginal peoples which includes Indians (more commonly referred to as First Nations), Inuit and Métis. Each of these distinct groups of peoples have unique histories, languages, cultural practices, and spiritual beliefs. There are more than 630 First Nation communities in Canada, which represent more than 50 Nations and 50 Indigenous languages.

The Town of Banff is developing an Indigenous Framework with an emphasis on building relationships, education and action, to be a guiding policy document to assist the municipality in being respectful, cooperative, and active partners in the process of reconciliation. Download this Draft document and provide any suggested changes or additions to randall.mckay@banff.ca by February 3, 2023:

Indigenous peoples have inhabited the area in and around present-day Banff for more than 10,000 years. Long before the arrival of European explorers, Indigenous groups throughout the Americas had extensive trade networks in place allowing for the movement of people, goods, services, and ideas over hundreds of kilometres at a time, which is contrary to the commonly held belief that Indigenous peoples were living in isolated communities, limited by topography. One of these trading centres was on the site of the present-day town of Banff.

The town is located on the Bow River which was used by Indigenous people for millennia for travel, hunting and fishing. For tribes of the Great Plains water was “life” and of great importance. The river was named the Bow because local Indigenous peoples made bows from Douglas Fir trees that grew along its banks. The Stoney Nakoda name for the Bow River is Ijathibe Wapta “a place where people made bows out of Saskatoon saplings.” In the Blackfoot language, the river is called Makhabn, which means “river where the bow reeds grow.” The bow and arrow were intrinsic to the way of life of many First Nations groups and were often made with one or more additional materials (bone, antler, sinew, intestine) adding strength and flexibility.

Banff was also long a site for a winter village of early Salishan speaking people who built semi-subterranean homes called pit-houses, house pits, or kekuli. The kekuli or “ke’kuli” is one of the oldest shelter sites known to Canadian archaeology.

The village site was located downstream of Bow Falls included at least 14 dwellings and was protected in 1913 as the first nationally protected archaeological site in Canada. Of the 15 to 20 dwellings identified in the vicinity of Banff, only a few are known to remain. Despite the loss of the original village site, more sites have been discovered in other valleys along east-west travel routes in Banff National Park. The peoples who built these likely used inter-mountain travel routes to hunt bison, sheep, tend seasonal agricultural plots of plants, and meet others. These types of villages were also used seasonally year after year in the mountains, the same buildings for hundreds of years, the same sites for a few thousand years.

This area from Banff stretching towards Calgary is part of the Bow Valley. For early peoples arriving on foot from the east, or for those arriving over mountain passes from the west, they would have known they were close to their destination, to the holy springs, when they could recognize a mountain in the shape of a resting buffalo in the middle of the valley. To the nearby Stoney Nakoda First Nation people, the mountain has always been a buffalo—a “sleeping buffalo” or Eyarhey Tatanga Woweyahgey Wakân. A Blackfoot name for this mountain is Iinii Istako.

Called Tunnel Mountain for the past century – even though there is no tunnel to speak of – it was so named as a result of Canadian Pacific Railway surveyors in the 1880s who considered building a tunnel though the mountain for the train tracks.

However, there is something more prominent and somewhat hard to miss once you become familiar with what you are looking at.

In September of 2016, 15 First Nations signed a resolution calling for the beginning of an official process with the Natural Resources Canada's (NRC) Geographical Names Board of Canada to rename Tunnel Mountain to Sacred Buffalo Guardian Mountain. At their November 2017 "Indigenous Leaders' Dialogue" in Banff, representatives ceremonially granted the mountain the name "Sacred Buffalo Guardian Mountain."

The Numbered Treaties and Treaty 7

Peace and friendship treaties with First Nations began with the British Crown in the early 18th century in Eastern Canada. These pre-Confederation treaties were to allow for peaceful European settlements on Indigenous lands. By the late 18th century, the British began to ask for ceded land and negotiated in what is now known as Ontario. The nature of treaty making changed in Canada following the Royal Proclamation of 1763 being issued by King George III. This founding document, that First Nations ratified with the making of the Treaty of Niagara in 1764, recognized not only Aboriginal rights, and the nation-to-nation nature of Crown-First Nations relationships, but it put in place principles to guide the Crown in treaty making (Borrows, 1997; RCAP, 1996; TRC, 2015b).

As documented in the Final Report of the Truth and Reconciliation Commission of Canada (2015, p. 199), “the Royal Proclamation of 1763, in conjunction with the Treaty of Niagara of 1764, established the legal and political foundations of Canada and the principles of Treaty making based on mutual recognition and respect.” These obligations set forth in the Proclamation still guide ongoing Crown-First Nations relationships and the Crown’s fiduciary obligations within contemporary contexts. Unfortunately, much of the true spirit and intent of the Proclamation has been lost from our public understanding. Following Confederation in 1867, Western expansion was seen by the Crown as a way to realize further economic development through land and resources. To support Western expansion, the Crown established 11 numbered treaties across Canada, with each of these treaties involving relocating First Nations to reserve lands to clear the way for newcomers.

Banff is located within the Treaty 7 region of Southern Alberta. Treaty 7 was signed in 1877 in southern Alberta at Soyoohpawahko, or Bowfoot Crossing. Five Alberta First Nations signed the treaty, including the Kanai (Blood), Siksika, (Blackfoot), Piikani (Peigan), Tsuu T’ina, and the Stoney Nakoda Nations of Chiniki, Wesley and Bearspaw.

The Bow Valley has also long been important to the Ktunaxa (Kootenay) and Secwepemc First Nations who traditionally occupied lands and used the watersheds of the Columbia and Kootenay Rivers and the eastern slopes of the Rockies, as well as in parts of Alberta, Idaho, Montana, and Washington. The area was also used by the Mountain Cree clan of Peechee, and to the Dene of the far north and far south who have their rock art in the canyons here.

Before the drawing of political boundaries by Canada in late 1800s and early 1900s, there was an understanding by early peoples on both sides of the mountains, the people of the salmon of the Columbia River watershed and the people of the plains buffalo, that this valley is a shared space. An 1895 agreement involving the Ktunaxa, Stoney Nakoda, and the Secwepemc (or Shuswap/Kinbasket Band), affirming each other’s rights to harvest on each side of the continental divide.

There were many agreements among First Nations peoples preceding the 1877 Treaty 7 signing, reflecting the changing nature of territories. However, Treaty 7 involved the Canadian Crown as a signatory, and therefore obligates all current inhabitants of the region to honour this Treaty.

The Métis People have travelled through and lived on both sides of the Rocky Mountains for over 200 years. Métis are people of mixed European and Indigenous ancestry and have a distinct collective identity, customs, and way of life, unique from Indigenous or European roots. The majority of Métis continue to live within what some call the Métis homeland, a loosely defined area along the former fur-trade route, which includes Manitoba, Alberta, Saskatchewan, Ontario, British Columbia, and the Northwest Territories. Métis individuals did not live on reserves, since they did not receive the official Status Indian designation that would have allowed them to join on-reserve bands.

Towards a Shared Future

Treaties are a foundational part of Canadian society and all people living in Canada are treaty people with their own set of rights and responsibilities. By understanding the colonial history of Canada, we can renew our relationships with each other, build a future based on peace and friendship and move towards meaningful reconciliation. An acknowledgement of Treaty 7 region is a commitment to thinking about the past and what our relationship to Indigenous Peoples means to us today.

This is a journey that the Town of Banff is starting, with conversations and a deeper exploration of the natural and human history of this exceptional mountain area. The Town has much work ahead in terms of listening to First Nations and Métis people in the region, forging relationships, nurturing cultural vibrancy, and learning from centuries of knowledge about community and this mountain region.

Every society, in one way or another, lays claim to a territory. Within that claimed territory, a culture arises from the mutual relationship with the land. It is through this mutual relationship with the land, that cultural icons, symbols and images, values, customs, ceremonies, stories, songs and beliefs of the people are developed. These, in turn, are embodied into the very being of the people. 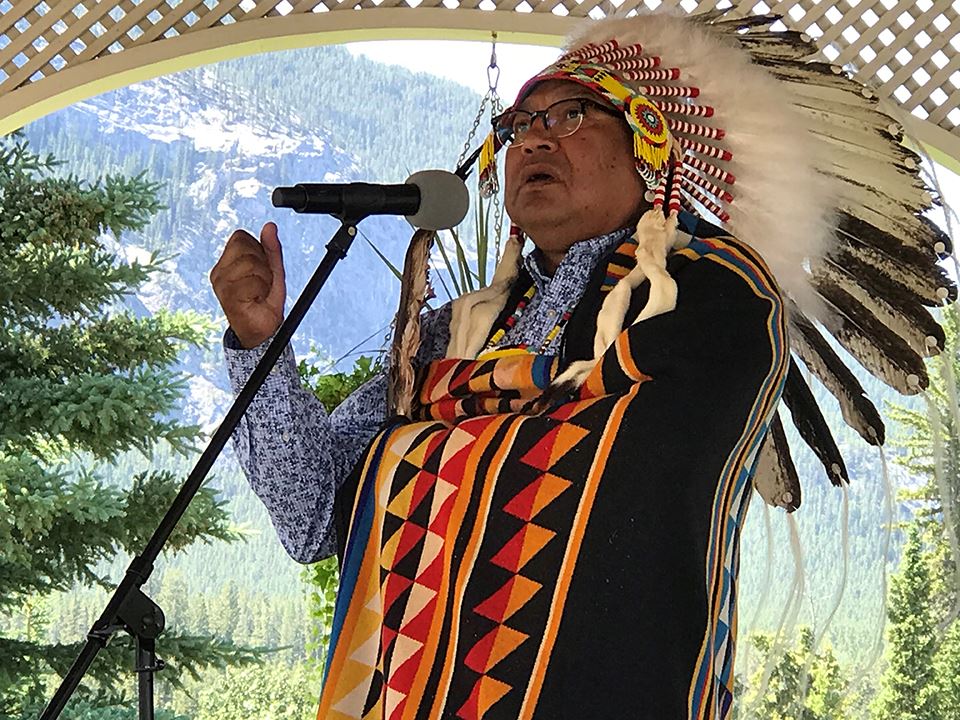